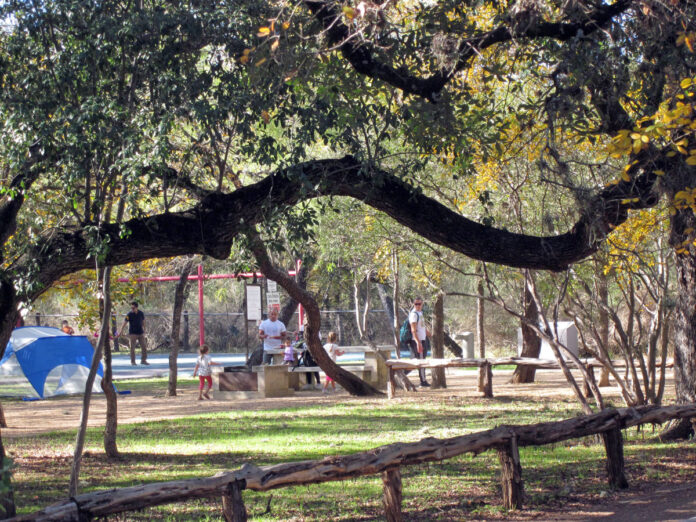 As San Antonio has grown out of its Center City roots, highway and interior road construction followed by subdivision upon subdivision of houses, shopping and more, has turned what was once lush green, open space into a virtual concrete city, similar to most cities in the country. And though San Antonio leaders identified years ago a critical need for a return to verdant, open land in the form of parks, it wasn’t until fifteen or so years ago, when 311 acres of such land ten miles north of downtown, in the midst of some of the toniest neighborhoods in the region became available, did the city’s mayor, Phil Hardberger, and other city leaders act on the citizen’s behalf.

Voelker Ranch is just such a “plot” of land. Once a dairy farm, Max and Minnie Voelker, the farm’s owners, resisted all temptation to sell to the next developer, as a sea of houses built up around their property. However, with their death and the placement of the property in a trust, the city acted and secured a portion of the ranch for just such a park, now called Phil Hardberger Park and Conservancy.

Parks for Every Taste

While avid golfers will find more than 30 private, public and semi-public courses to play, the metro area also boasts a broad range of public parks that meet other recreational needs as well. From City of San Antonio skate parks to a National Historical Park encompassing some of the oldest European-established missions in the United States, the area has the facilities and the weather to induce everyone to “get out there.”

Texans have always revered the outdoors and have always cherished strong family ties. Every community in the metropolitan area, large or small, provides park settings, playgrounds and accommodations for picnicking that encourage family gatherings.

From Schertz to Floresville, Castroville to Boerne, Helotes to Seguin, local, neighborhood and community parks await your family’s visit whether for a simple sandwich lunch and half an hour on the swings, an afternoon at the pool, or an all-day full-fledged, extended-family reunion, complete with friendly competition, well-smoked brisket, and a screened pavilion. Many of these parks have special picnic areas for large groups often covered to provide cooling shade or shelter from unscheduled rainstorms or searing heat.

In New Braunfels, Landa Park offers families a variety of activity, including rides on a miniature train. A pint-sized train also operates in Brackenridge Park in San Antonio. A ride aboard the Landa Park Railroad or the San Antonio Zoo Eagle might be the perfect finale to cement a family’s memories of a great outing.

Those who want to extend their outdoor adventure with an overnight stay will find plentiful opportunities to camp at parks located throughout the area. Many of the public outdoor venues that offer camping are managed by the Texas Parks and Wildlife Department.

Many of these state-managed parks, wilderness and natural areas are also great places for hiking, rock climbing, swimming and boating in areas bordering area rivers and lakes. A long weekend might be the perfect time to set up your tent and throw down your sleeping bag in Pedernales Falls State Park, Blanco State Park or Enchanted Rock State Natural Area.

Thanks in large part to the need to control flooding along Texas river basins, boaters and water skiers will find the San Antonio metro area literally awash with great venues for water sports. Lake Placid, near Seguin, is available via a public ramp under Interstate Hwy 10, while Canyon Lake, located sixteen miles northwest of New Braunfels, has numerous access points for boats, as well as camping and picnicking facilities. Boating and fishing can also be enjoyed at Medina Lak just outside Helotes. City-owned parks in Castroville and Boerne offer fishing too. (Be aware that state fishing regulations apply everywhere you wet a line.)

Fishermen will also find plenty of other places to test their skills from city, county and state parks along the Medina, Comal and Guadalupe Rivers to Braunig and Calaveras Lakes (run by the City of San Antonio) just south of the Alamo City off Interstate 37.

For those who want to commune with nature rather than compete with it, there are many wilderness and nature parks in the region that are dedicated to preserving the native ecology. Dinosaur tracks uncovered by a flood some years ago along the Cibolo Wilderness Trail, which is part of the Cibolo Nature Center in Boerne, is a prime example of this celebration of the local habitat, as are the Friedrich Wilderness Park and the Bamberger Nature Park, both in metro San Antonio and both notable not only for their native flora but for the wildlife it attracts, particularly the feathered variety of animal inhabitants.

Birding enthusiasts may soon consider their new address to be heaven on earth. Practitioners of this most popular recreational activity will be thrilled to learn that the region lies beneath the largest of the three major North American flyways for migrating birds The area is also well-placed on the boundaries between several ecological regions, giving local nature lovers real variety when it comes to native plants and the birds they support.

Great parks for adding to your lifetime list during migration periods include Castroville Regional Park and Southside Lions Park. As previously mentioned, Bamberger Nature Park and Friedrich Wilderness Park are other good birding sites, as are Braunig, Calaveras and Mitchell Lakes.

With pleasant weather most of the year and parks to fit every need and taste, there’s never a reason for not having outdoor fun here.

With a pleasant year-round climate, and a virtually endless list of fun places to go, San Antonio offers a wide array of outstanding...
Read more
Outdoors

Water Recreation In and Near San Antonio

It’s more usual than unusual for the majority of U.S. cities to be a healthy distance from very large bodies of water, spell that...
Read more
Sports

For the Active Sports Person

By Arthur Glenn According to the U.S. Weather Bureau, and Chamber of Commerce, the sun shines over the...
Read more
- Advertisment -