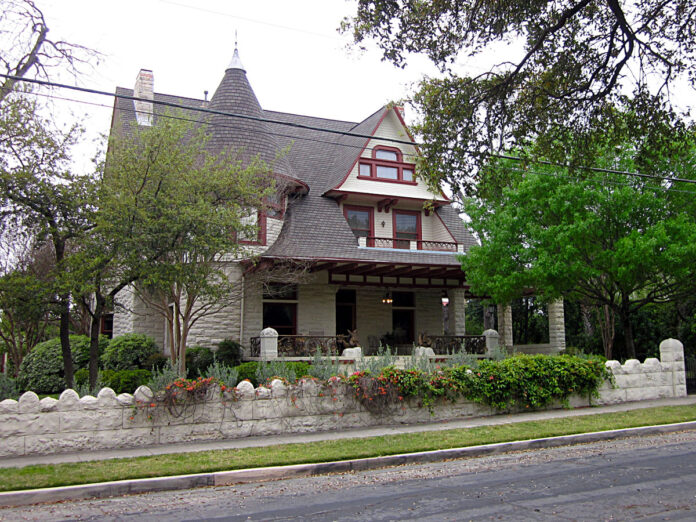 One of the most enchanting and diverse communities in metro San Antonio is known as Monte Vista. Some of the most elegant, distinctive residences in the entire metropolitan areas can be found in this near-north side San Antonio neighborhood that was one of the first—and the largest—in the United States to be designated a historic district.

The Monte Vista Historic District comprises some 100 city blocks and is bounded (generally) by Trinity University and Hildebrand, McCullough, Ashby, and San Pedro Avenues. Structures within the district have been under the protection of the Historic District and Landmarks Zoning Ordinance since early 1987. Historic zoning affects only the external appearance of the property, not its use; proposed changes to exteriors require approval by the San Antonio Historic Review Commission.

Preservation of the neighborhood’s ambiance and history can be traced to the efforts of the Monte Vista Historical Association, which was formed in 1975 to stop the demolition and decay of structures Monte Vista’s History within the area. One of the guiding lights of the drive was Trinity University professor emeritus and Monte Vista resident, Donald E. Everett, who is also the author of San Antonio’s Monte Vista, published by Maverick Publishing Company in 1999.

Monte Vista, located 1 ½ miles north of downtown San Antonio contains fourteen platted subdivisions, and was primarily developed during the “Gilded Age,” the post-Civil War Reconstruction period that saw San Antonio become the largest city in Texas. During this era—roughly 1890 – 1930, prosperous local families, their wealth derived in proper Texas fashion from cattle and oil, began to build elegant homes on the heights of the city’s northern edge.

Distinctive residences designed by well-known architects who adapted national architecture trends to satisfy local tastes continued to be added to the area as late as 1958. Throughout the development period, Monte Vista builders sought to meet the housing needs of a variety of segments of the public, from wealthy ranchers to middle-class merchants. The resultant wide variety of housing stock has been one of the district’s strengths and has contributed to the neighborhood’s residences through the years.

It is also a wonderful place to raise a family, or retire. Quiet streets lined with sidewalks, lots of mature trees, a convenient location, porches, and the ordinances in effect because the area is a designated historical district make a Monte Vista home a smart investment as well as a delight to the senses of any fan of architecture, community or history.

Houses within the Monte Vista Historical District showcase a gamut of styles from Queen Anne to Spanish Colonial Revival and a range of sizes from modest cottage to breathtaking mansions.

Living in the Present

Monte Vista’s attractiveness as a place to live is not just its historical architecture. In addition to its preservation and value-protection activities, the Monte Vista Historical Association organizes lots of fun activities that build community within the district. Block parties, Easter egg hunts, parades and home tours encourage neighbors to meet and befriend each other in the neighborhood.

This is but one of many articles about place-making, district communities and neighborhood activity to appear in San Antonio In Focus.

Castle Hills is a 2 ½ square mile city with one foot inside and one foot outside San Antonio’s north central Loop...
Read more
Housing

With a history dating back to the early 1700s and ever so slightly earlier, when four Christian Missions: Concepcion, San Jose, San...
Read more
Housing