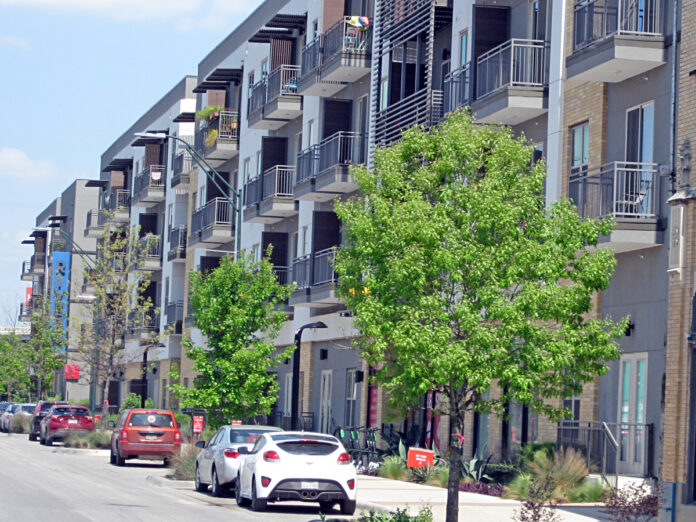 For years, San Antonio had been notoriously short on the side of apartments and condominiums in the downtown area. In fact, as far back as I can recall, the mid-1970s, there may have been 4 or 5 apartment buildings in “center city,” specifically on or near Houston and St. Mary’s Streets, to satisfy the needs and desires of potential residents.

That all has changed, slowly, over the last 15 years as the population of the city has soared. And with new businesses and industries getting started in and near downtown, spell that Tech, there is a new and flourishing demand for places to reside. Just two miles north of center, the opening of The Pearl, a mixed use development dealing plentifully in restaurants and other retail, as well as a first class hotel, and apartments and condominiums, has had a profound effect on downtown’s growth, albeit on Broadway leading away from center. Three additional apartment complexes that come to mind include the Rivera, the Mosaic and the Can Plant in The Pearl.

And just south of downtown about a mile, at and near the Blue Star Arts complex along South Alamo and Probandt, the effect has been similar, with the rise of the Big Tex apartments along the San Antonio River, Southtown Flats and other complexes south on Probandt.

And not intending to shortchange the other two directions, east and west from the center of the city, ten years ago the Vistana, a high rise apartment building was opened at W. Houston St. and Santa Rosa and about the same time, the Vidorra, near Interstate 281, directly east of downtown, was opened.

Neighborhoods full of small, medium and large sized houses have flourished both north and south of downtown. One of the oldest, dating back to the late 1800s is King William with mostly large, stately houses. Other neighborhoods include the Historic Arsenal, Lavaca, and north of downtown, Tobin Hill.

Upon further understanding, the downtown area is now “alive and jumping” though it is still well shy of the number of apartments and condominiums that have been proposed by the city, 7,500 in all. Still, the reach of development has performed wonders for downtown, enlivening an area that had been quiet far too long.

Castle Hills is a 2 ½ square mile city with one foot inside and one foot outside San Antonio’s north central Loop...
Read more
Housing

With a history dating back to the early 1700s and ever so slightly earlier, when four Christian Missions: Concepcion, San Jose, San...
Read more
Living Here

In a city with a population hovering around 1½ million, in an area approximately 550 square miles, it shouldn’t be a surprise there...
Read more
- Advertisment -