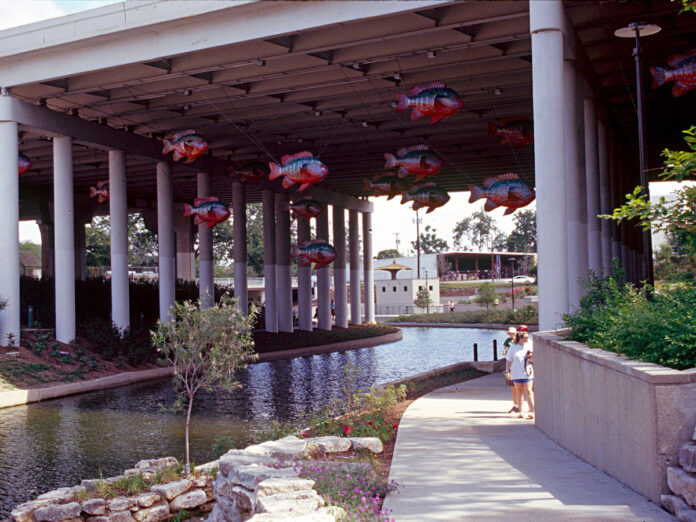 Made of sculpted concrete, the $3 million fairy tale grotto by San Antonio artist Carlos Cortes is the masterpiece of the Museum Reach. The gaping jaws of a jaguar serve as an entrance near the corner of Camden and Newell Streets, leading down into a spectacular cave-like grotto with  splashing waterfalls and “follies,” such as the craggy face of Father Nature, carved into the rough-hewn walls along the River. Up around the bend are 25 giant, glowing long ear sunfish suspended beneath the I-35 overpass, by Philadelphia artist Donald Lipski.

Bird calls, frog croaks, crickets, and other natural sounds emanate from beneath the Jones Avenue Bridge beside the San Antonio Museum of Art (SAMA) as part of a sound installation by Bill Fontana of San Francisco. Other public art projects on the Museum Reach include flickering optical panels by San Antonio artist Stuart Allen, glowing, painted stripes by Mark Schlesinger who re-located from New York to San Antonio and reflective “light chimes” by British artist Martin Richman.

SAMA, housed in a former Pearl Brewery, now has a dazzling new entrance, pavilion, covered terrace, and landing on the river, thanks to the Museum Reach expansion. Featuring work from around the world, SAMA boasts an impressive collection of ancient Greek and Roman art as well as Asian and Latin American Art Wings. It also has a large modern and contemporary collection and often features work by local and regional artists in its Focus Gallery.

San Antonio has the state’s oldest private art museum, the McNay Art Museum, which doubled its exhibition space in 2008 with the Jane and Arthur Stieren Center for Exhibitions, a natural-light filled pavilion designed by French architect Jean-Paul Viguier. The oldest part of the museum is a 1920s Spanish Colonial Revival mansion that belonged to founder Marion Koogler McNay, known for her collection of late 19th century French and early 20th century American art. The McNay features a large collection of post-World War II modern art, one of the most comprehensive print collections in the Southwest, and the Robert L.B. Tobin Theater collection.

Artpace, founded by Linda Pace, has become one of the country’s most acclaimed international artist residency programs. Housed in a former Hudson Auto dealership, Artpace has changing contemporary exhibits and sponsors the annual Chalk-It-Up! Festival on Houston Street in downtown.

The Southwest School of Art, housed in a 19th century Ursuline school and a converted tire store, offers a wide variety of classes in everything from ceramics to computer graphics, as well as changing exhibits that emphasize fine craft.

The heart of the city’s contemporary art scene can be found in Southtown at the Blue Star Arts Complex, a warehouse district that includes the Blue Star Contemporary Art Center and numerous galleries and studios. Say Si, a noted after school program for young artists, is presently across the street.

Another lively arts district can be found along South Flores Street, with an emphasis on Latino art at the Gallista Gallery. The Guadalupe Cultural Art Center on the Westside of the city features a broad array of Latino arts and classes, ranging from poetry readings to a flamenco festival. Museo Alameda, located downtown in Market Square, houses a full slate of Latino art and culture exhibits.

In the shadows of the Tower of the Americas in HemisFair Park are the Instituto Cultural de Mexico, which features touring exhibits and performing arts programs sponsored by the Mexican government, and the Institute of Texas Cultures, operated by the University of Texas at San Antonio. Nearby, on the Eastside, the Carver Community Cultural Center spotlights African American arts.

The Witte Museum on Broadway is the city’s oldest museum. Besides featuring history and science exhibits, the Witte has permanent displays devoted to South Texas culture and its natural flora and fauna. The Witte also has an extensive collection of early Texas artists, including famed “bluebonnet painter” Julian Onderdonk. Located on the San Antonio River in Brackenridge Park, the Witte often has exhibits for children and offers educational programs in the H-E-B Science Treehouse.

The Majestic Theatre on Houston Street is home to the Broadway Across America series, a full-season of touring Broadway shows.

Musicians from the San Antonio Symphony, which performs at the Tobin Center for the Performing Arts, are involved in a number of satellite groups such as the Olmos Ensemble, SOLI Chamber Ensemble and Camerata San Antonio. Classical music organizations, apart from the Symphony, include Musical Bridges Around the World, San Antonio Chamber Music Society and the Tuesday Musical Club. The Mid-Texas Symphony performs in Seguin and New Braunfels.

Other performing groups are the Alamo City Men’s Chorale, Friends in Harmony, Children’s Chorus of San Antonio, Conspirare, and the San Antonio Brass.

Although the city does not have a fully professional theater company, quality productions are plentiful. Attic Rep presents some of the best performances each summer at Trinity University, The San Pedro Playhouse in San Pedro Park is the city’s oldest theater while the Sheldon Vexler Theater at the Jewish Community Center is one of the newest. And the Magik Theater is the leading children’s theater, attracting students during the school year and to their annual summer Shakespeare in the Park.

Fort Sam Houston is home to the oldest dinner theater, the Harlequin Dinner Theater. The Woodlawn Theater in the Deco District and the Josephine Theatre mainly do musicals, while the Renaissance Guild is known for African American theater. You can find complete listings for all local theater productions on the San Antonio Theater Coalition’s website at www.satheatre.org.

For more information about the city’s cultural Affairs’, visit their website at www.getcreativesanantonio.com.